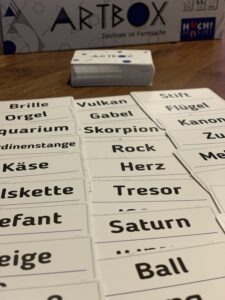 Drawing is a matter of form

That is certainly an odd sentence in a normal context, but the subtitle goes pretty well with what Artbox, one of the Autumn novelties from Huch! matters. We are dealing with a game in which we have to paint.

“Painting is more for girls!”

You don’t believe all the statements I’ve heard when it comes to this game. With some of them I couldn’t do more than give my mustard in the form of experiences and words, with some others I had the opportunity to bring the game to the table in order to convince with deeds. What can I say? Artbox is just not for everyone, but the majority of those who had played the game with me had fun and have (or would) play it again.

First of all, we would like to thank Huch !, who made the game available to us for the review.

The first time I saw Artbox in action was during SPIEL.digital. There was dear Andrea, our “supervisor”; -D of the publishing house, as our guest online and let us guess what the hell she had painted on us there. That sounded funny – so: 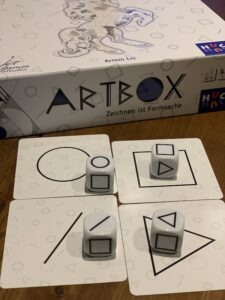 Bring it on, I like to put that on my table too.

And I did that.

The whole thing works like this: One person rolls all 4 dice. The results are the shapes available to everyone to draw a term on that round. Then everyone gets 2 cards, 1 of which has to be drawn – only with the help of the 4 shapes just rolled. When everyone has drawn, the cards plus a certain number of cards are shuffled and laid out face up. The same thing happens with the drawings. It is now everyone’s task to write on the back of a piece of paper which word belongs to which picture (these are assigned numbers).

The one whose picture was guessed the most gets points, and so does the one who correctly assigned the most pictures. The rest comes away empty-handed. The game continues until a certain number of victory points have been won by one person (varies with the number of players).

That sounds a bit like Krazy Pix – doesn’t it? So just with dice instead of tiles? Yeah, that’s right! But that 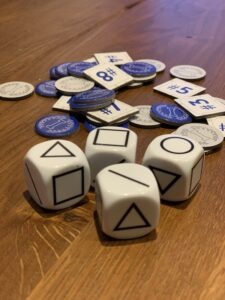 Who might initially think: Huh? How am I supposed to draw a unicorn with 3 circles and a square ?! Isn’t that possible ?! But. This works out. Experience shows. It is even amazing how few shapes it really takes in the end to draw something – that the others then even recognize!

I laughed a lot at this game because there is always someone who just can’t do it. Either drawing or guessing. I find it funniest when the bad raters then explain how they came to their results. Great – I would like to have that much fantasy in my life.

But: Artbox is not a pioneer for me.

The best drawing game in my opinion is and remains simply masterpieces. It’s incredibly funny. If I had to choose between Artbox and Krazy Wordz, I would forego drawing and instead use words and play Krazy Wordz. (Kräzy Wordz works almost exactly like Kräzy Pix and this here – only that you invent new words with letters 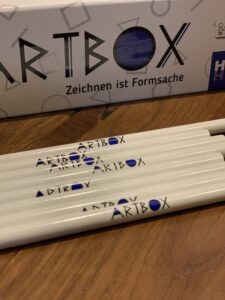 must.) And I’ve laughed so much that hardly any other game in my life can ever beat it. I can even remember moments when my drink shot out of my nose because I just had to laugh so hard.

And unfortunately Artbox can’t do that. It’s entertaining, it’s entertaining, makes for laughs and funny moments – but that’s about it somehow … Artbox won’t get a favorite game status, but is a welcome guest at the gaming table and a solid entertainer for half an hour. It doesn’t take much longer to play – the ice in the round is broken afterwards. ? 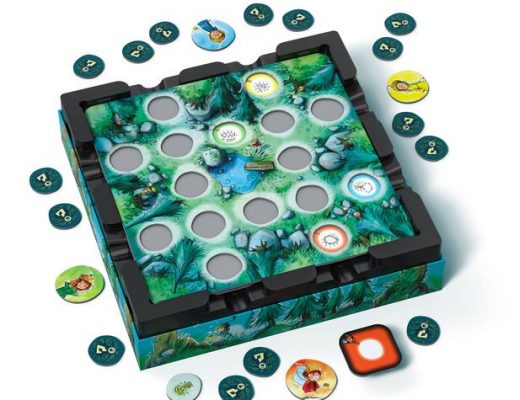 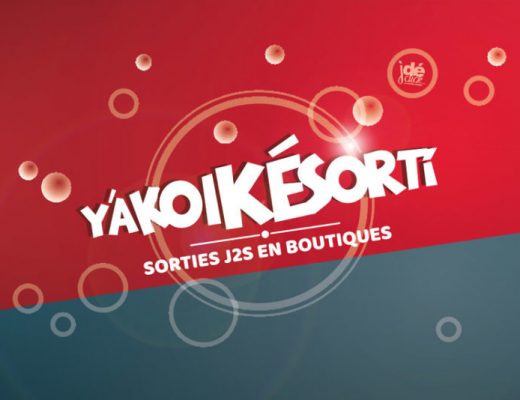